Compared to about 16-percent of men, over 25-percent of women say they may leave or downshift their jobs within a year—adding up to about two million American women—due to the economic and personal hardships caused by a year of crises. Our business community risks losing women in leadership and future women leaders if we do not develop comprehensive plans to support and advance women through this time.

According to McKinsey & Company's annual gender equity report, women have been more likely to face difficulty as a result of the COVID-19 crisis, like taking on childcare or homeschooling on top of already full workweeks. This was also true for women of color, but with the added emotional toll of recent racial injustices and the disproportionate impact of the virus on Black and brown communities. McKinsey notes that Black women, in particular, faced more significant barriers to workplace advancement and a lack of leadership support pre-pandemic leading recent events to exacerbate these existing hardships within this segment of the workforce.


PLUS, a member presentation from Go Hike Alaska.


Theresa Lyons was born in New Orleans, Louisiana.  She’s the eldest of 3 daughters.  Her family moved to Alaska in 1975.  She attended East and Chugiak High Schools (graduated from East High).  Theresa completed her undergraduate work at Edward Waters College in Jacksonville, Florida in Business Administration, and earned a Master of Public Administration at the University of Alaska Anchorage.  As a first-generation college student, Theresa understands the impact education can have on an individual life and career.

Currently, Ms. Lyons serves as Chief Executive Officer of YWCA Alaska (YW).  Prior to her work with the YW, Theresa worked at the University of Alaska Anchorage in the Division of Student Affairs where she served as Executive Director of Student Outreach and Transition.  She is a program builder, skilled facilitator, and advocate.  Theresa believes human resources are the greatest asset of an organization, therefore she fosters a work environment where staff are mentored, challenged to grow, and empowered to lead.  She encourages staff to do their best every day, which she defines as excellence.

Theresa is a woman of faith and attends church regularly.  She believes in serving in her community, which she does through her membership with The Anchorage Chapter of The Links, Incorporated where she currently serves as President.  She is a member of Delta Sigma Theta Sorority, Incorporated.  She enjoys reading with members of her local book club, and spending time with family and friends.


Ruth Schoenleben (pronounced—Shane-lay-ben) is the President & CEO of Nine Star Education & Employment Services and has worn many hats during her 29-year tenure at Nine Star. Nine Star is an agency that works with under- and unemployed Alaskans to become financially self-reliant before they become part of Anchorage’s homeless footprint. Ruth has served Alaskan youth and adults in various training, management, and program development capacities in rural and urban Alaska for nearly five decades. Ruth is committed to working collaboratively to build her community and her state. To that end has served on numerous community boards, councils, and coalitions throughout Alaska. She is currently a member of the Anchorage Homeless Prevention & Response System Advisory Council and a Commissioner on the Serve Alaska Commission. With a focus on building Alaska’s workforce and, ultimately, its economy, she is committed to improving the quality of life for all Alaskans no matter their ethnicity, economic status, age, and gender.


Karinne Wiebold is an economist with the Alaska Department of Labor and Workforce Development in Juneau, where her work is regularly featured in the Alaska Economic Trends magazine. Prior to joining the State of Alaska, she worked in housing and community development in Colorado. In Boise, Idaho Karinne covered the Idaho legislature as a reporter for NPR News91 as well as interned with the Idaho Department of Commerce and Labor. She was born and raised in Fairbanks with her four younger sisters and after a nice long period in the lower forty-eight, she is delighted to be back in Alaska where she belongs.  Karinne enjoys the good life in southeast Alaska, kayaking, hiking, fishing, and picking berries. You can contact her at karinne.wiebold@alaska.gov.

All virtual Monday forums will now be hosted via Remo. We'll have networking beginning at 11:30 am. The presentation will begin at Noon. 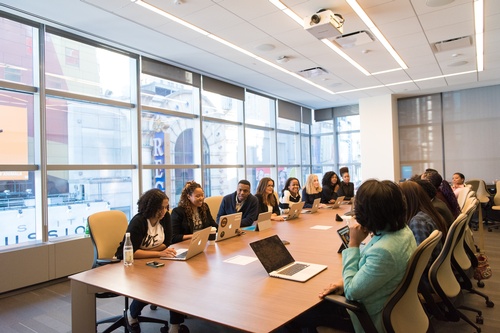 Online via Remo. An event link will be sent the morning of the event. Please add noreply@remoinvite1.co to your address book so the email isn't filtered/blocked.