April 22, 2021
MembersPress Release
Minister of Foreign Affairs Award
Issued to Greg Wolf
On December 1st of last year, the Ministry of Foreign Affairs announced the recipients of the Foreign Minister's Commendation, and Gregory Wolf, Executive Director of the World Trade Center Anchorage, was selected as a recipient from Alaska. The ceremony to hand over the Foreign Minister's Commendation to Mr. Wolf was held on April 13, 2021 (Tuesday) at the Consular Office of Japan in Anchorage with a small number of participants due to the COVID-19 pandemic.
Greg Wolf first went to Japan in 1988 when he organized a trade mission of Alaska State senators on a trip to Tokyo to promote trade and tourism. In 1989, he was the recipient of the Japanese Government Monbusho Scholarship. He studied Japanese at the Osaka University of Foreign Languages and conducted a year-long business research project at Hitotsubashi University.
Mr. Wolf has contributed to strengthening economic relations between Japan and Alaska, promoting mutual understanding and friendship between Japan and the United States since he started working as the Trade Representative of the State of Alaska in Japan in 1991. Following his assignment in Japan, he returned to Anchorage and served first as the Director of Overseas Projects for the Anchorage Economic Development Corporation and then as the State of Alaska's Director of International Trade and Market Development where he oversaw the operations of the State's international offices, including Japan.
He has been the Executive Director of the World Trade Center Anchorage since December 2002, and has hosted events on the current situation and outlook of Japan's business world, and on the possibility of strengthening economic relations between Japan and Alaska every year from 2013 through 2019.
The Foreign Minister's Award praises individuals and groups who have made significant contributions and achievements in promoting friendly relations between Japan and other countries, and recognizes all levels of people while encouraging continued excellence. We would like to extend our heartfelt congratulations to Mr. Wolf and extend our deepest respect for his achievements so far.
-Consular Office of Japan in Anchorage 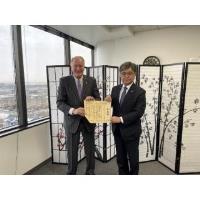