ANCHORAGE, AK (June 26, 2020) – For the ninth consecutive year, Cornerstone General Contractors (Cornerstone) has been awarded the Alaska Governor’s Safety Award of Excellence. The Governor’s Safety Award of Excellence is presented to organizations that demonstrate distinction in protecting the safety and health of their personnel, the environment, company assets, and reputation. The Award also recognizes companies that demonstrate and promote corporate citizenship excellence.

Over the past ten years, Cornerstone has taken its safety program to a new level. Cornerstone has been a strong participant in the Alaska OSHA CHASE program for over five years and became a CHASE GOLD partner in 2018. Throughout this process, Cornerstone has advanced to the point that it exceeds all regulatory requirements for its safety program and has become a mentor and coach for its subcontractors as well as for competitors in the industry. The diverse background and experience of Cornerstone’s Safety Team allows them to bring different perspectives to their work. Whether doing jobsite walkthroughs, planning a project specific safety plan, or expanding company safety and environmental programs and initiatives, Cornerstone’s collaborative approach has resulted in a superior record.

In March 2020, Cornerstone became the first general contractor in the country to win first place in the Associated General Contractors (AGC) of America Safety Excellence Awards for two consecutive years. Our Safety Manager and Senior Project Manager represented the Cornerstone, presenting and competing at the AGC of America National Conference in Las Vegas. Cornerstone was the only Alaskan company in the competition. 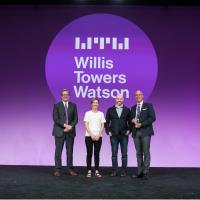