Alexander’s service to his country includes two tours in Vietnam with the 5th Special Forces Group, where he was selected as the noncommissioned officer in charge of the group’s financial section and responsible for more than 5,000 soldiers. During his time in the military, Alexander received numerous awards and commendations. After retiring from the U.S. Army, Alexander returned to serve in a civilian capacity as the deputy chief of staff for the Manpower and Force Management Division. Alexander has  devoted more than 38 years of volunteer service to credit union boards and committees and has served on the Alaska USA Federal Credit Union board of directors since 1996.

“Bobby’s contributions to the military, his community and the credit union mission are simply immense,” said Geoff Lundfelt, President and CEO. “I’ve had the honor of working with Bobby for many years and I can’t imagine a person more deserving of this award. He has set an example we should all strive to live up to.”

Alaska USA Federal Credit Union is a member-owned, not-for-profit financial cooperative with $8.3 billion in assets and more than 675,000 members worldwide. The credit union operates more than 90 branches and service facilities in Alaska, Arizona, California, and Washington State. Alaska USA offers a 24/7 Member Service Center and access to more than 55,000 surcharge-free ATMs worldwide, as well as online and mobile solutions. 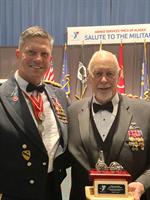